And the Emmy goes to ... Andrew Cuomo? Governor gets award for COVID briefings

The Democratic governor is getting an International Emmy award on Monday.

A link has been sent to your friend's email address.

A link has been posted to your Facebook feed.

And the Emmy goes to ... Andrew Cuomo? Governor gets award for COVID briefings

Gov. Andrew Cuomo warns of a COVID surge after Thanksgiving during a briefing at the state Capitol on Nov. 18, 2020. New York State Team

Cuomo, a Democrat whose daily briefings at the height of the COVID-19 pandemic received extensive airplay across the nation, will receive the International Emmy?Founders Award?on Monday.

The governor is being recognized in part for his use of television to inform people of the latest coronavirus updates at the height of the state's outbreak in March and April, according to The International Academy Of Television Arts & Sciences, which granted him the award.

Cuomo held more than 100 consecutive days of COVID-19 briefings, many of which were broadcast on cable news networks internationally.

The governor will receive the International Emmy during a virtual award ceremony Monday. It's a separate ceremony from the better-known Primetime and Daytime Emmys, which focus on American television.? 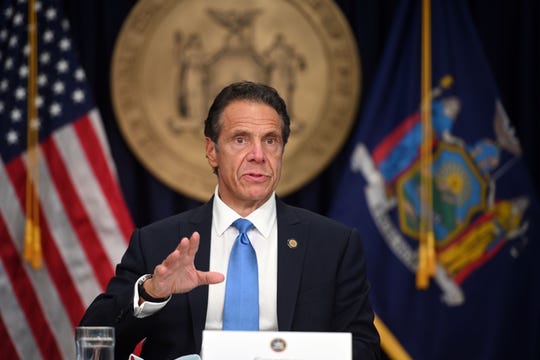 “The Governor’s 111 daily briefings worked so well because he effectively created television shows, with characters, plot lines, and stories of success and failure,” International Academy President & CEO Bruce Paisner said in a statement. ?

“People around the world tuned in to find out what was going on, and?New York tough?became a symbol of the determination to fight back.”

Cuomo said he was recently informed by the International Academy about the award.

He taped an acceptance speech that will be played during Monday's ceremony, Cuomo said.

State Republican Party Chairman Nick Langworthy criticized the decision to grant Cuomo the award, calling it "proof positive that Hollywood lives in its own alternate reality."

"It's offensive to so many families that lost loved ones in New York," Langoworthy said in a statement.?"Governor Cuomo definitely deserves an award for best actor in the fictional story lines that he’s created declaring himself a great leader."

New York has had more than 25,000 confirmed coronavirus deaths since the beginning of March. Nationwide, deaths have topped 250,000.

More: Andrew Cuomo is having a moment. So are his beloved PowerPoint slides during the coronavirus crisis.

Jon Campbell is a New York state government reporter for the USA TODAY Network. He can be reached at JCAMPBELL1@Gannett.com or on Twitter at?@JonCampbellGAN.

We cover the stories from the New York State Capitol and across New York that matter most to you and your family. Please consider supporting our efforts with a subscription to the New York publication nearest you.